THE SHORT STORY:
Die-casting manufacturer RCM Industries in Chicago found itself in competition with suppliers in Mexico for a large outsourced project. A fleet of new Universal Robots’ e-Series collaborative robots with built-in force-torque sensing took on repetitive high-precision tasks, increasing output and reducing costs to make this U.S. firm competitive with low-wage countries while providing higher-value jobs for workers.

CHALLENGE:
When a large customer was considering offshoring production to save costs, the team at RCM Industries knew it had to drive cost out of its product without reducing the value the company provides its customers. The high level of precision required to fit and self-align parts onto the CNC machine chucks made automation even more challenging.

SOLUTION:
RCM has now deployed UR10e cobots in two identical cells where they each tend two dual-spindle CNC lathes in the same cycle, manufacturing a consumer plumbing product. Operators simply load parts on a table and the robots move them from station to station, picking up a raw part, putting it in a pre-fixture to align it correctly, placing it on the first chuck then the second chuck, and finally dropping the completed part onto a conveyor belt to return to the operator. The cobot’s integrated force-torque sensing allows it to search for the correct position on the chucks and self-align. The force-torque sensing also allows the robot to detect and reject parts that are out of shape  or parts that don’t load correctly.

Another RCM application has a UR10 cobot picking up metal rings from a lathe tended by a cartesian robot. The UR10 puts the parts in a wash tank to wash off any lubricants, then circulates the parts in front of a blower to dry them before placing the finished product on drums.

“One of the main tangible benefits that we got right away was a consistency of the throughput from those cells,” says Rob Marconi, RCM Industries director of engineering and technology. When operators were manually loading machines, they were often juggling multiple tasks such as checking parts and bringing parts in and out of the cell. That meant that even though they could load the machines fairly quickly, they could also be inconsistent. “With a robot, it’s consistently doing the same motion every time at exactly the same time, so we immediately saw about a 15 percent increase in throughput as soon as we deployed them,” states Marconi.

Easy adjustments with no safety caging
While the robot works, operators can freely enter the cell to adjust the CNC machine or perform other tasks. This ability to deploy without safety fencing after performing an initial risk assessment is a key advantage of cobots over traditional robots. “If the cobot does not load successfully, it’ll issue an error to the operator, in which case the operator can go into the cell, remove the part, and start up the cycle again without having to open up any safety caging and lock and tag-out the cell,” explains Marconi.

“We’re always asking, ‘Can it be automated, and what is that investment, and does it make sense?’ And we’re finding in more cases than not, it makes sense.” 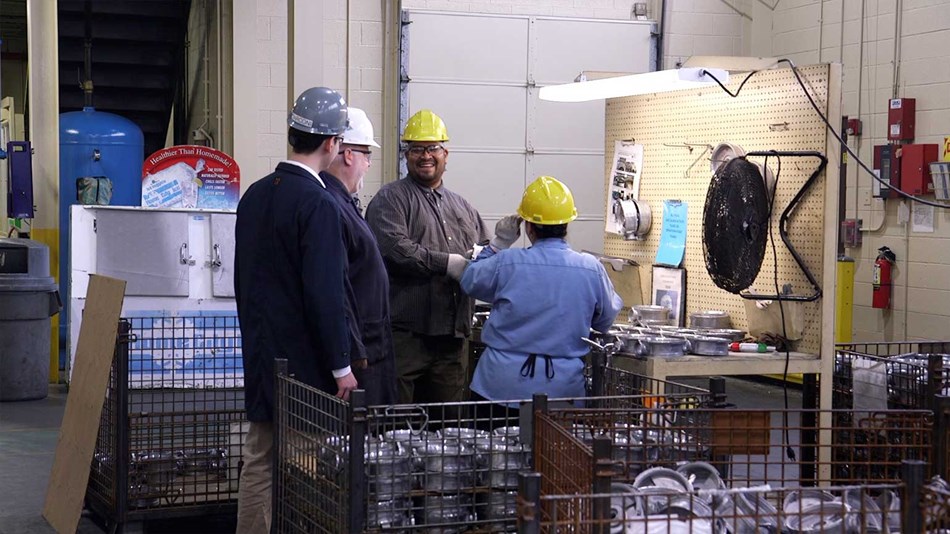 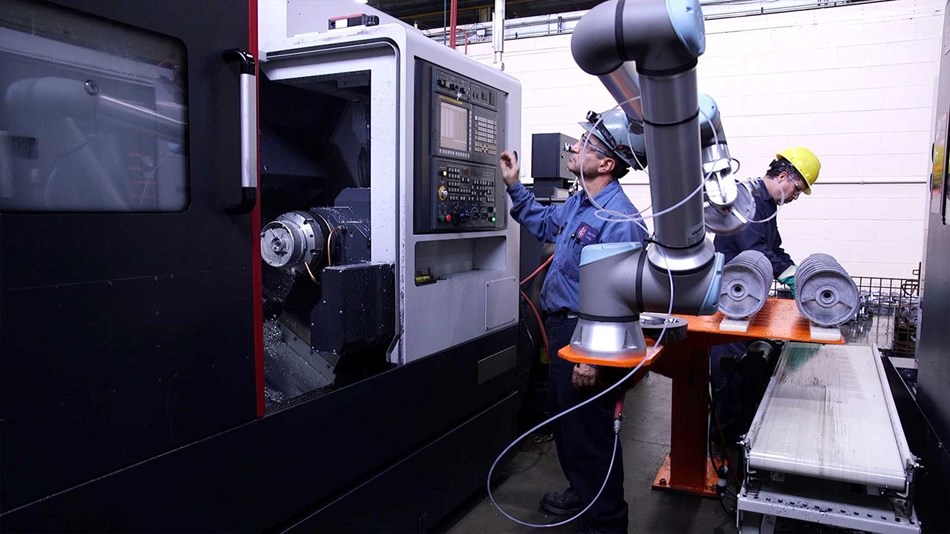 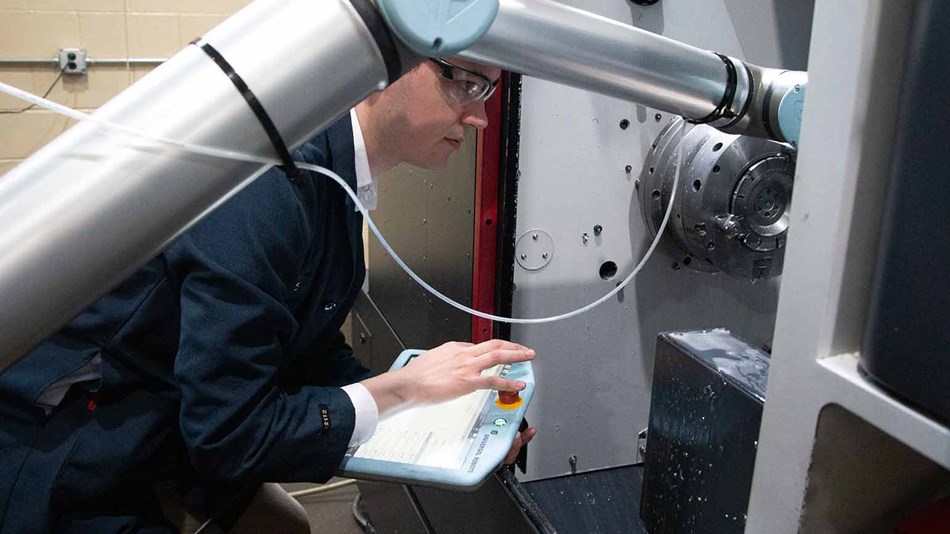 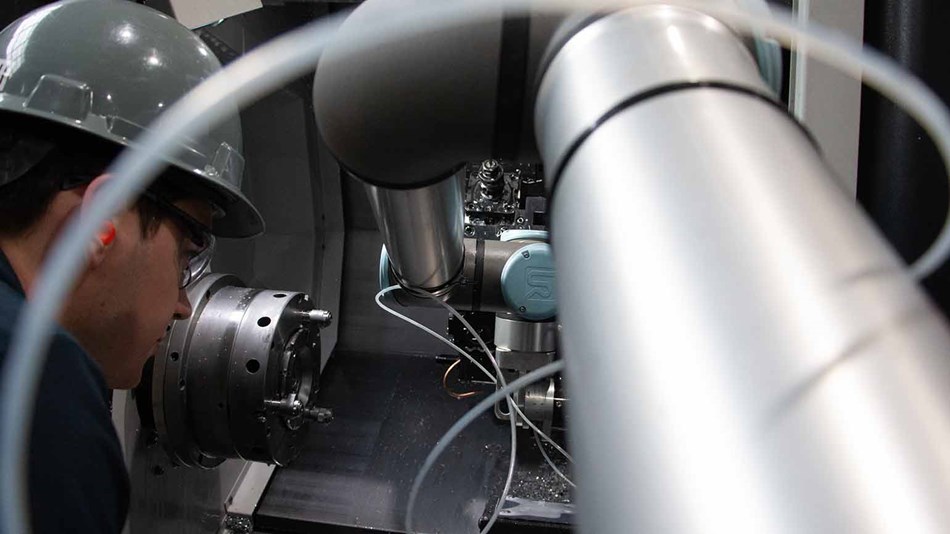 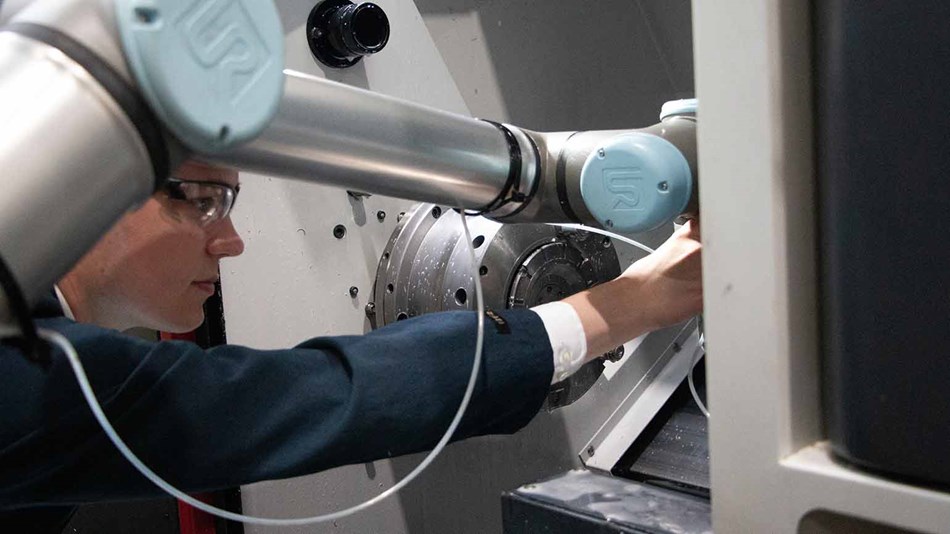 Employees move to safer, more valuable tasks
While staffing requirements for these particular tasks were reduced through collaborative automation, sales and marketing director Mike Higgins explains how the company was able to retain U.S. jobs by being more competitive. “We were able to gain revenue and gain capacity, so those employees could be deployed to other departments and other services within the organization,” he says. “When it comes to staffing in an urban area such as we are, it’s very tough,” Higgins explains. “All of us manufacturers are fighting for skilled employees. We need to look at all times where we can automate, especially in repetitive tasks.”

Online resources make integration easy
With no background in robot programming, Marconi was able to download the PolyScope simulation software from Universal Robots and create the entire program structure before the robot even arrived. At that point, he simply downloaded the program to the cobot and taught it the waypoints on-site using the UR cobot’s teach pendant.

To grip parts for the machine tending application, RCM Industries chose a PHD three-jaw Pneu-Connect gripper from the online UR+ showroom. The gripper is UR+ certified, which means it is plug-and-play ready for integration. “It has all the air valves already built in, all the wiring completed, and any coding necessary to integrate with the robot already done,” says Marconi. “We simply plugged a wire into the robot, installed the software directly into the teach pendant, and we were ready to go.” 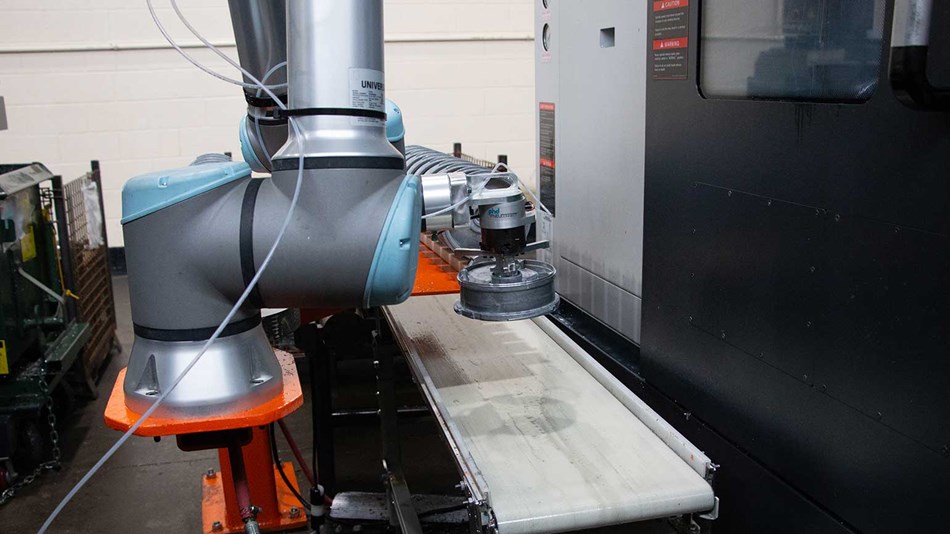 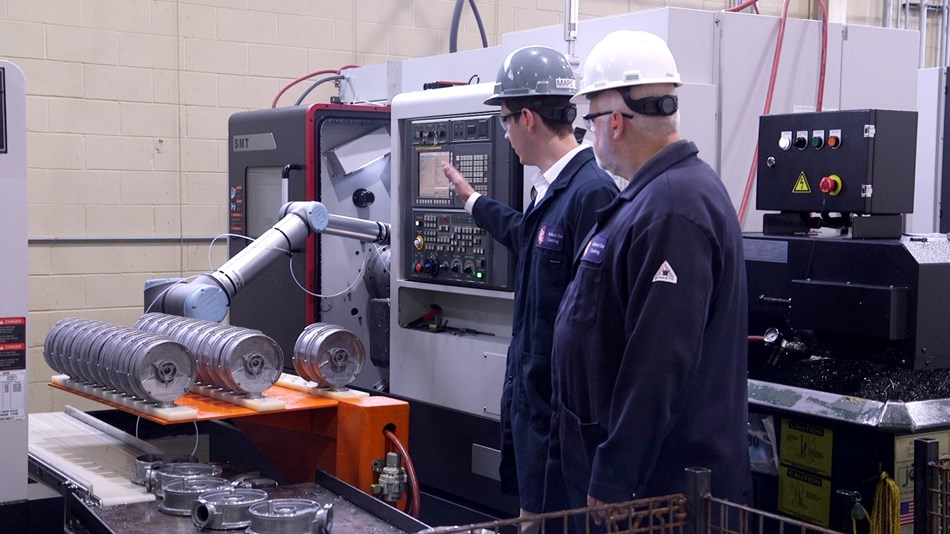 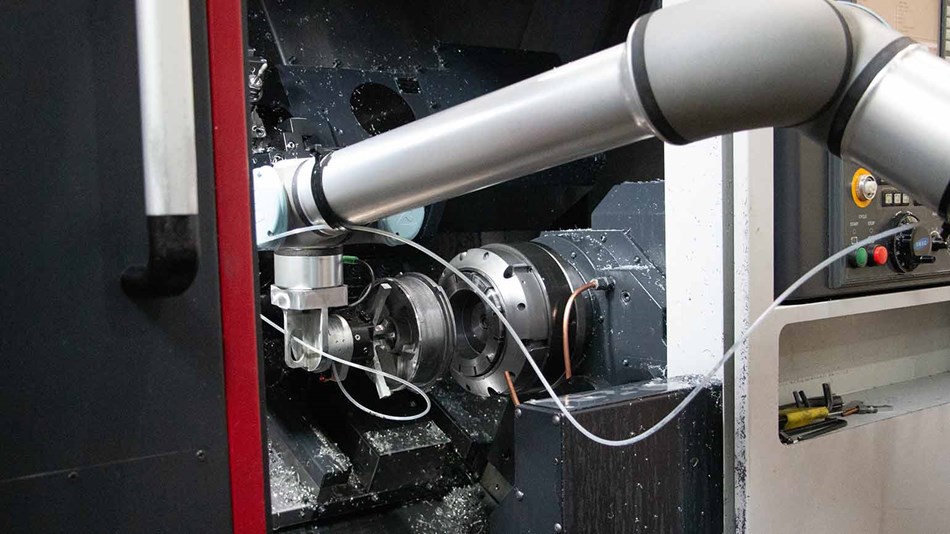 Fast ROI justifies future plans
Marconi expects to see continued benefits from the cobots, which paid for themselves in less than a year. “We have many future applications planned, but I think one of the main benefits of these robots is they’re so easily able to be redeployed,” he explains. “As our line expands and as we’re looking to improve on throughput, we already have plans to take those robots, move them to different areas, and get better throughput from those cells without having to re-do any kind of caging or any kind of wiring.” This is very different than traditional industrial robots, which are rarely redeployed because of the costs and downtime related to moving bulky safety caging.

Automation specialist Cameron Friend with FPE Automation helped RCM select the UR cobots. “The e-Series robots are what we are leading with our customers as the cobot of choice,” he says. Advantages he outlines include intuitive programming, great user experience, fast joint replacements, integrated force-torque sensing, and, of course, the increased repeatability of 30 microns for the UR3e and UR5e and 50 microns for the UR10e. “Those are all very important factors that are helping us break into new applications. Besides machine tending these are tasks such as deburring, dispensing, packing and palletizing.”Quote to highlight:
“We’re always asking, ‘Can it be automated, and what is that investment, and does it make sense?’ And we’re finding in more cases than not, it makes sense.”
Mike Higgins, sales and marketing director, RCM Industries